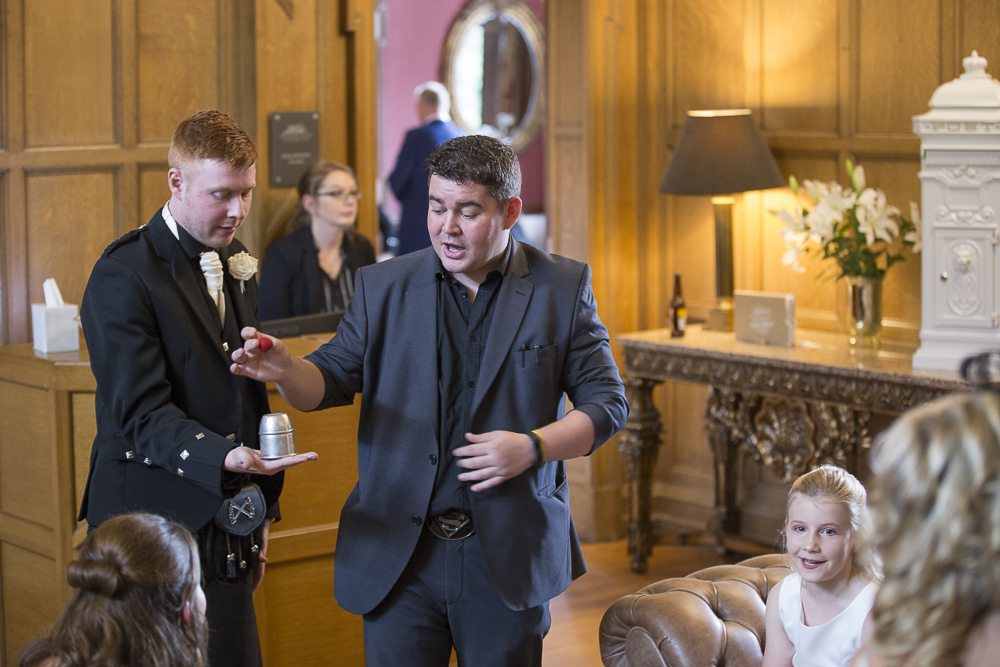 Strolling magic otherwise known as street magic or close-up magic was made popular when the famous magician David Blaine started performing card tricks, coin tricks and even levitating in the middle of the street.  Close-up magic has since exploded in the UK and with many modern magicians favouring sleight of hand magic over the traditional ‘cutting a woman in half’ illusions.  Magicians are no longer thought of as cheesy, they are now seen as cool and retro.

A popular time to hire a strolling magician is during a champagne reception.  This occurs during wedding photographs, at business networking events and at house parties. Woody’s career in magic started at business networking meetings where he was hired to break the ice and get people talking to each other.  It can be quite daunting to start a conversation with a complete stranger and sometimes you can meet people who you haven’t seen for years and you can’t remember their name.  Woody talks with your audiences and extrapolates information like; how they know the host, what line of work they’re in and what golf course they play at.  When he leaves a crowd, the guests will have talking points from how the magic was achieved to the best way to hit a 9 iron.

Apart from magic, Woody also has a keen interest in Psychology which he uses to help him pick crowds.  He utilises his knowledge of group dynamics and body language so that he doesn’t interrupt people when they are in the middle of an important discussion.  This allows him to mix and mingle with your guests in a non intrusive manner.

Woody is widely regarded as one of the rising stars in Scottish magic.  He has had the pleasure of entertaining thousands of guests in Glasgow, Edinburgh and Scotland. He has won the last 3 close-up magic contests he has entered beating several other full time professionals.  He is the current close-up champion of ‘The Scottish Conjurers Association’ and   ‘The Scottish Association of Magical Societies’.  He won these contests performing with cards, ropes, rubber bands, mind reading, coins and poker chips.  This means that he has a wide array of magic to choose from to entertain your guests.