Confessions Of A Conjuror 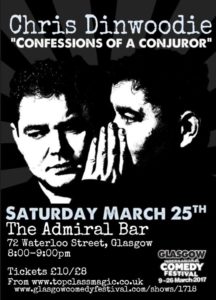 Have you ever wondered what it would be like to spend your life as a professional magician?  After nearly 14 years of touring the world Chris Dinwoodie’s will spill the beans on the high’s and lows (mainly the lows) of his magical journey

Expect to hear about his most embarrassing stories, the worst gig he’s ever performed? Dealings with the police and celebrities.

There will also be some old magic and some brand new magic he’s never performed in front of a live audience before.

Expect to be amazed and entertained.