“Are there any magicians in Scotland like Dynamo?d How Does Dynamo put the mobile phone in the bottle? These are 2 questions that I get asked every night at the moment and they’ve got me thinking about my own magic career and the perception that the public have on not just magicians but entertainers in general.  The thought is that the cream will always rise to the top and that Dynamo is heads and shoulders above the rest of us because he actually has magical powers.   Both of which are not the case and when I try to describe my thoughts on TV Magicians I’m often looked at with a kind of…”aren’t you just jealous?”

Be honest, if someone slightly weird looking approached you in the street and started staring at you intensely  how would you feel?  I 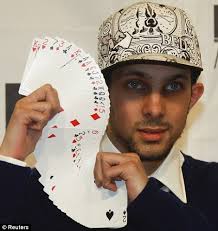 know I’d be freaked out and I’m pretty sure I’m not alone; however, picture the same scene, a weird looking guy approaches you but this time there’s a TV cameras and a sound boom and god knows what else.  The first thing to go through your head is probably –“ I’m going to be on TV” and the second thought is – “hey there’s that guy off the telly”  Now I will add, as far as I’m aware, there are no camera tricks on his show.

The Last I was asked to perform magic on TV to demonstrate if magic could attract girls. Now believe it or not I’ve written a small book on the psychology of approaching groups but all my experience and knowledge could be thrown out the window when you approach with a camera crew behind you…and I’m not even famous.  The girls were happily enjoying their lunch so this situation would normally take two minutes of introduction & rapport building to provide the girls with a pleasurable magic experience (not that type of experience for my normal readers) However, the lights were on, the camera was on and as soon as I approached the girls were more than happy to be on camera.

What am I trying to say?  If you would like a magician like dynamo to perform at your event you have to ask yourself this question?

Do I want the magician to give my guests a demonstration of magic…or do I want my guests to be entertained via magic?

For the last 9 years I have asked my clients, “why are you considering hiring a magician” and they’ve always had the same answers,

However, in all my experience I’ve never had one enquiry asking me to make their guests believe in magic or to do a demonstrations of magic.

Am I better or worse than Dynamo?

In all honesty we’re just different performers.  I do like his show though and magicians love him because he’s made magic popular again so more bookings for us.  So yes Magicians in Scotland do like Dynamo  to find out more about him visit http://en.wikipedia.org/wiki/Dynamo_(magician)