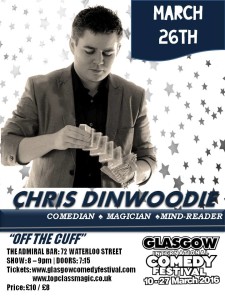 On Saturday 26th of March Chris Dinwoodie, aka Woody The Magician presents his Comedy / Magic show “Off The Cuff”  This will be a mixture of some of his classic routines and some never seen before miracles.

Compering at the Bier Halle on Suchiehall street Glasgow