Last week I was the house party entertainer / magician for the 21st birthday party of the lovely Esmee.  I was really looking forward to this gig because I’d chatted to the client (her mum) on the phone and she was lovely but more importantly…she got my sense of humour and liked my cheeky charm.  I knew she’d been in contact with a few other magicians and I thought it was my personality she’d fallen for but no…turns out her Daughters boyfriend is called Woody.  WTF? 2 Woody’s in the same room – don’t think I’ve ever met another Woody.
So I turned up still dying with my man flu; but, my body knows when it’s time to perform there’s no room for illness.  I’ve often joked that even when I die I’ve probably still got 2 or 3 gigs left in me.  Don’t know why – but something just kicks in and say’s “It’s show time”

The mum, Mary, had asked me to perform one of my cheeky opening lines which I was more than happy to do and within minutes we had started the show and as Kevin Bridges would say, “Everyone was having a good time”. However, someone was feeling a bit left out and decided to come and watch the show.  Yip I had a wee cheeky heckler – a dog!! Now I can’t remember the young pups name but he was very inquisitive and liked to watch the show and even participate on the odd occasion.  I think Pudsy from Britain’s Got Talent may have inspired dogs across the nation to move into the entertainment world 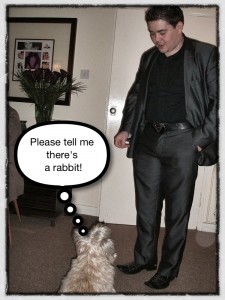 I’ve never been a ‘Gig And Run’ type of guy.  Being one of the more social magicians out there I quite like to stay for a coffee after a gig and have a wee chat with some people about magic.  With Dynamo being all the rage magic is all of a sudden interesting again.  People want to know about certain tricks, how we get into magic, who inspires us or sometimes just to learn a basic trick themselves.  So yeah, that’s all good and I’m more than happy to share my experiences.

At this show I was taken very good care of and I was even offered a bowl of soup.  I thought that might be overstaying my welcome but then I heard it was lentil (my favourite) but not only lentil…it was “Mental Lentil” How could I say no?  I have to admit…it was mental – very spicy – but just what the Doctor ordered.  So after a Q&A session and my bowl of vitamins it was time to head back to Costa Del Cambuslang.  On the drive him I received a lovely txt saying how much they had enjoyed my show and today I received the photo of the dog looking at me which i thought was a lovely touch.