Coincidence plays a big part of magic.  The spectator freely selects a card and by some magical coincidence it’s the same card the magician predicted at the start of the show; however, sometimes real life coincidence without any sleight of hand of trickery can be even more magical.

Let me share my favourite serendipity of the year. 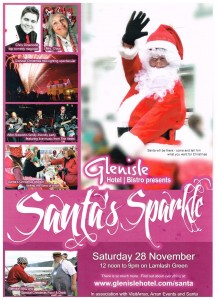 At the end of November, I was performing magic over in Arran at the Santa Sparkle event, run by the guys at the Glenisle Hotel.   The event is staged in a Marquee across from their hotel.  The event has a light show, fireworks, a live band, Santa Clause & Mrs Clause, professional dancers, fantastic stalls…and moi.

The main show I’m meant to do is a stand-up comedy magic show.  That starts at 7pm, however since I’m there I’ve been signed up to do some close-up magic and balloon modelling during the day.

On paper, it all looks great, however, this is Scotland, the land where a lovely idea on paper can quickly turn to paper mache.   The event is taking place in a marquee said marquee is on the grass, next to the beach.  The day was meant to start with a santa parade, but unfortunately uninvited guest arrived called  Storm Clodagh.  She turned up bringing with her 80mph winds, hailstones and torrential rain.  Although the marquee didn’t blow away  there was now a permanent  water feature  running over the grass making it wet and muddy.  I wasn’t sure if the event would go ahead but these Arran folks are not to be put off by something as mild as a bit of a hurricane.

My first show of the day begins and I’m providing balloon models for the kids.  This is not something I specialise in but I’m pretty quick at firing them out.  Queues aren’t the most exciting thing to wait in line for, especially when you’re standing in a puddle but the audience were there and they were happy to wait.  I’m making the balloon animals and the majority of the kids want a dog or a sword so the queue is moving pretty quickly and everyone is in high spirits.

Next in line is a young girl about eight years old.  I ask her what she would like but she doesn’t respond, I ask her again and she cuddles into her mum and avoids all eye contact.  I don’t know if she’s just painfully shy, she’s depressed because of the weather or if she’s sad because Mrs Clause and the dancers had to cancel.  What I do know is that she’s waited in a puddle for about 20 minutes so she clearly wants a balloon just not to communicate.   I’ve had this before.  The solution is normally just to start naming things you can make the child will nod or the parent will jump in and say, “Oh, you like dogs, will the nice man make you a pink dog?” I start saying things I can make.  I say would you like a dog?  teddy bear? a swan? a cat? snake?  giraffe..no reaction, no answer – I’m struggling so I change from animals to objects. “How about a flower? sword? wand? hat? heart? a machine gun?

The mother looked at me when I said machine gun like I’d lost my mind but could see I was trying my hardest to find something.

At this point,  I’m really struggling  and I’m running out of things I can remember how to make or even kid on I can make for that matter (I’ve sneakily passed on a few swords in my time cleverly disguised as light sabres and by disguise I mean, I’ve changed the name and let the child’s imagination do the rest)

So I say, “erm, how about a…octopus, or a…parrot…or erm, a snail? ” BOOM!!!The child & her mother jump into life like one of the fireworks has gone off.

Her mum says, “She loves snails!!”

I said, “Well you’re not going to believe this, but my favourite thing to make from balloons are snails”

(This is actually true, I think of all the animals the snail is the most lifelike and the antenna give it character. )

seventy five seconds later I hand over her snail.  She smiles and reaches into her pocket.   I start to get embarrassed.  Lots of times people think they have to pay for the balloons because they don’t realise unlike the stalls, I’m paid to be there.  But it’s too late, the wee girl has reached into her pocket and has come out with an outstretched arm and a clenched hand.  I really don’t want to take this wee girls sweetie money especially as she’s started off so shy and has now really come out of her shell (no pun intended)

So I’m thinking, “I’ll open my hand, she’ll drop a pound in there, I’ll vanish it, make it appear from her ear, give it back to her and say it’s a magic coin and ask her to keep it safe for me”

I open my hand and she gives me…a beautiful white snail shell.

I don’t know if this was her lucky shell,  she may have had a full pocket full of them for all I know but I was really taken aback at this wee gift and I shall keep it with me always.  I’ve even named it Shelly 🙂