I’m happy to announce that I’ve joined that elite group of performers to be flown around the world.  Some go to Australia – I went to The Isle of Islay.

Islay is about 90 miles from Glasgow and is just behind the Isle Of Bute.  It’s a small island with just over 3000 people living there.  It’s famous for its whisky distilleries and the excellent Scottish film called Angels’ Share.

I was booked to do some close-up magic for the wedding of Mhairi and husband…it was her wedding!

I get to the airport and I was looking forward to a little snooze on the plane.  However, the air hostess asked me if I would mind taking the emergency seat on the plane.  I asked if there was another seat to which she replied, “yes…but he’s flying the plane”.  She wasn’t kidding!  I built bigger gliders as a child from the Airfix modelling kits.  So I’m on the plane guarding the emergency door knowing that if I make a mistake me and the other 3 passengers lives could be in risk – it wasn’t too much responsibility.  As we embarked on the mammoth 25 minute flight that left at 8:30 the pilot gave us a wee tour guide of the Isle of Bute and the names of all the puddles we were flying over.  I suppose when he signed up to do the transatlantic journeys he had factored in more excitement.  However, it was at this point he said something strange:

DING DONG: “Ladies and Gentlemen (Pause…I think he checked the flight roster and yes today he was carrying both males and females so he continued) Today’s flight left at on schedule at 8:30 the flight duration is 25 minutes so we will land on Islay at 9:10am”

DING DONG:  “For those of you wondering about the time difference the flight only takes 25 minutes but the airport doesn’t open till 9am!”

I swear I thought we’d be landing on a field; but, sure enough it was a airport.  We get off the plane and we wait on the bags to come through and I see one of the funniest things ever.  You know on a normal airport there’s the luggage carousel?  Well this was more like the conveyor belt found at Tesco!  Normally when your bag comes out in the first 3 you feel lucky!  Mine came 3rd or as it’s known on Islay – ‘last’.  I’ve been told there will be a taxi waiting for me and I let fame get to my head.  I was expecting someone there with a cardboard cut out with my name on it or maybe the phrase “magician” or something.  But, no – nothing.  After waiting around for a wee while I check my email to see if I’ve to phone a taxi and there’s only one other person in the airport who eventually approaches me and says “Are you the magician? ” I nod, “He says I’m Tom, I’m your taxi”.  Cool.  We then walk to the carpark and I see a yellow car from the 80’s.  I’ve never seen a car like it and Tom informs me it’s a limited edition.  He then says, “Excuse what you see next” and opens the passenger door.  “Now we’re talking” I’m thinking,  finally a bit of celebrity treatment for surely the foremost entertainer on the island!  I was wrong.  The driver door didn’t open so Tom had to use the passenger door to enter and exit the car.  Now it was my turn and as I entered I saw tapes, yip, cassette tapes and plenty of them (Any readers born after the 80’s go and ask a parent or guardian)  Then I spotted his magnetically powered Satnav otherwise known as ‘A Compass’ (this is 100% true). Right on the dashboard where you’d normally find  the satnav was Tom’s trusty compass.  I joked about it and Tom said it kept him heading in the right direction.

Tom informs me of Island protocol.  He says “it’s slooooow”.  He informs me that my understanding of “I’ll do that tomorrow” would be interpreted as “I’ll do that the day after today”;  however, on Islay this only means, “I’m not doing it today”.   It would appear I’ve been on The Islay Gym Schedule and Islay Diet for quite some time.

I arrive at the hotel, the person who was meant to leave my room hasn’t departed yet, the cleaner hasn’t turned up yet etc and before I can think of complaining I think of the countless stories of Tom telling me “this is Islay – things run slower here”

So I asked the girl if there was anywhere I could have breakfast and she thought about it for a minute and said, “You could try the restaurant” I inquired “And where might this restaurant be?” She responded “upstairs – just tell psycho you’re staying here tonight and will be requiring an extra breakfast”.  I’ll address these points sequentially:
1)  It was the hotels restaurant.  Now call me daft; but, If I worked in a hotel that served breakfast and someone asked me where they could get breakfast I wouldn’t have to think too long to find the answer.  It would be the same as someone phoning me up and asking if I knew anyone that perfomed magic at weddings and me saying, “erm…well, I suppose I do them”.   However, there was a more pressing matter

2) Who the f**k is psycho? Did a guy with a knife just turn up to the hotel and they said “Great your here, get chopping those onions!” and Psycho for the first time in his life just felt accepted?

So up I went to the restaurant and sat down, placed the sharpest knife to my right (you can take the boy out of Glasgow but you can’t take Glasgow out the boy) and the chef appears and looks at me confused.  I informed him that I was staying overnight and would like an extra breakfast.  He asks me what I want, I ask for a menu, he looks confused and says “Do you just want the full lot” I agree, hoping for a fry up rather than the deeds of the restaurant,  and he says it’ll be a couple of minutes.  I sit down and I my mind wonders and starts to think about psychos in horror films and how they always move really slow – maybe they’re just from Islay!  Maybe the guy cooking my breakfast is the ‘King Of The Zombies’.  Who knows? but I’m hungry and I’m brought out of my daydream when Psycho informs me the breakfast is in the silver containers at the back.  It’s your standard breakfast buffet set-up with the big industrial metal containers where you lift the lid and take what you want.  I lift the lid of the first container to discover one sausage, I put it on my plate.  Container two contained one slice of bacon, container three contained one fried egg and container four contained about twenty black puddings.  Would it not have been easier to just put these things on a plate and bring the plate over? 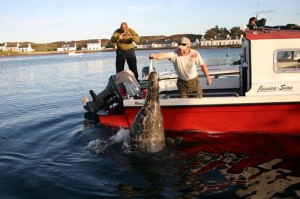 After breakfast I went for a walk thinking I might as well see some of the place. I popped into the post office and turn on the Glasgow charm, “bla bla bla, first time here bla bla is there anything I shouldn’t miss here?”

Clerk: “You could try The Pier.”

So I’m over at the hub of excitement better known as ‘The Pier’ the excitement was wearing off but then up pops something in the sea and it turned out to be a seal.  The seal was quite causally playing popping his head up and about the place and I thought that was pretty cool.

I went for a wander and the island was beautiful and very relaxed.  Being an asthmatic there’s a strange sensation that most people don’t understand.  The air was really clean.  I could feel my lungs getting purified by the minute but it’s quite a strange thing to say to someone, “they air here is really clear”.  I’m sure there’s a really bad chat-up line in there somewhere and if there is…I’ll find it!

Off to the wedding.

I get started, tricks going well and I’m having a lot of fun.  It was a glorious day which made it very sunny and luckily for me everyone was wearing those reflective sunglasses so anytime someone took a card as soon as they looked at it I’d just see the reflection in their glasses.  After a while, people started assuming the cards were marked and were covering the backs of the cards.  It was funny because I was teaching some people how it was done and this was confusing the other guests.

Then I saw a blast from the past – I used to work in IT for an accountancy firm in Glasgow and one of the partners of the firm was the father of the groom.  How strange!  6 years ago I left his office in Glasgow and the first time I bump into him is on an island.

People were asking me what I thought of the Island and as I hadn’t really experienced anything all I could talk about was the seal at the pier and the hotel.

I thought I might have been the only person to see the seal or there might be numerous seals; but, it turns out there is only 1 seal and his name is Toby.  The legend of Toby is that he’s the laziest seal in the sea.  He swam into the pier years ago and people threw him fish and he quite liked it so just stayed.  Whilst other seals are out chasing fish, he just stays in the pier and the fisherman go out and do all the work and when they come back they feed him. The only time he goes out to sea is to mate.  I made the joke, “It sounds like he’s on the brew”  but no one found it funny.

Rumour has it he will swim up against the side of boats and people will rub his tummy with a brush.  However, years ago he got a bit big for his own boots because they used to have small boats who didn’t know the score.  Toby would say hi do his party tricks and if the people didn’t know who he was he’d jump on the boat and start looking for the fish himself nearly capsizing the boats in the process.

I thought Toby might be a story the tell the outsiders but sure enough every postcard in Islay has Toby on it.

I’m told Psycho basically turned up to the hotel 1 day not with a knife; but, with a Great Dane (the big dog) After some negotiations he was employed as live in chef.  He was given a room with bunk beds and the dog sleeps on the bottom bunk and Psycho sleeps on the top bunk.

I did meet one girl who was absolutely breathtaking, I didn’t chat her up though…because the air is so clean…told you I’d find it.

I had a cracking time.  I met loads of nice people and the wedding was fun & relaxed.  It’s just a shame I don’t like whisky because everyone else thought the stuff was great.  I’m sure I’ll be back over again as everyone who lived there loved the place.  They said it’s the place they wanted to raise their kids.  I’m sure a week there would either drive me mad or totally recharge my batteries.  That’s all for now folks.

Can You Make My Belly Disappear?