March the 14th is a day a lot of men celebrate with a steak and some private time with their misses.  Not for me though.  Oh no, it was off to the magic club to compete in the annual Scottish Conjurers’ Association Close-Up Magic Contest.

What is The Scottish Conjurers Association?

Better known as the SCA, It’s the oldest and biggest magic club in Scotland.  It’s been going for 89 years now and has had some of the Uk’s top magicians as members.  Most notably I believe Jerry Sadowitz was a member at one point.  If you’d like to join the SCA Checkout their new website at: http://www.scamagic.org/

What is the Close-Up Contest?

Well it’s a lot easier to carry a pack of cards than it is to carry the Sawing In Half Illusion…So essentially, everyone in the club performs close-up magic so the contest is of a good standard.

I’d put my name down for the contest but I didn’t know what to perform.  I always like to perform at least 1 new super trick at each contest.  And this year’s winner was The Ninja Rings

The Linking Rings / Ninja rings are my Nemesis.  It’s not the version you’ve probably seen on the TV it’s the small version popular 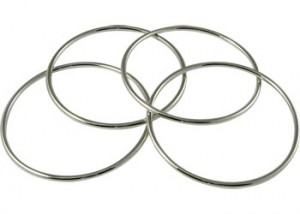 with the elite magicians in Japan.  I’ve been working on this trick for 4 years.  It’s so complicated that after a few day’s I always throw it back in the box and a month or 2 later I pick it up and play with it until the point of ultimate frustration at which point I make the decision of where they should be placed: In a box, on Ebay or in the bin.

I’d almost given up on it when I got to see the man who made the miracle famous-  Shoot Ogawa.  Shoot is a world legend and will be for eternity as he’s simply amazing.  So to see him perform anything live is always a treat and an education. And there I was at The Blackpool Magic Convention watching him and I couldn’t believe my eyes for 3 reasons:

At first I felt cheated that he hadn’t put this in his DVD but then I felt happy because I didn’t feel like such an idiot every time I got the move wrong.

But then I realised something.  I’m not Shoot.  He’s a magician with a mentor who’s been at it 14 hours a day since he was born.  I’m a magical entertainer.  So I decided to perform the linking rings my way.  I changed the presentation from a demonstration of magic to something more entertaining with a lot of my performing style in it.  So I locked myself in the garage with the camcorder and proceeded to practice till my hands couldn’t hold the rings anymore.  After 3 days I was happy with it and had scripted the routine and had it on video.  Finally finished practicing but was thinking about the contest and didn’t get to bed till 7am

Day Of The Contest

8am: The phone rings…. It’s my business mentor Stephen,

At this time in the morning I couldn’t make a cup of tea never mind make magic happen.  But, by 8:40 I was up and having my first practice session of the day.  It was terrible.  I couldn’t perform the opening move.  Tried it 50 times and only hit it 2 or 3 times.  Decided I was too tired so went back to bed.

11am Practice session: I’m even worse! 200 attempts and I’m not even close.

1pm: I’m in a bad mood now so retire to my happy place Facebook.  I moan about how crap I am at it and take some words of wisdom from some people on board and try again.

3pm: With a little more self belief I’m hitting it a little more often but I’m considering taking it out of the act as although it’s a really beautiful opener, it isn’t required; But, then I saw this poster of Richard Branson on my friend Jacquie’s wall.

I was starting to believe that this poster was sent to find me and I remembered what Stephen Hendry ,the Snooker player, has always said.  He’d rather lose walking away from the table knowing he’d went for it rather than playing it safe.

With that in mind it was off to practice one last time, I broke the move down and BOOM.  For the first time in 24 hours I got it 5 times in a row.  I wasn’t getting it every time but about 60% which I could live with.

As it’s a contest and magicians are pretty picky I decided to make a new set of ropes so they are super clean, polish the shoes, press the suit and it’s off to the contest. They’re not magic ropes, just really nice silky rope but you need to glue the ends so the ends don’t fray.  After turning the house upside down looking for glue, it was off to the shops only to discover nobody was selling any.  So after a few detours it was off to the club.  I got there and discovered I was on 4th which gave me just enough time to glue the ropes and have a last practice with the rings. Managed to hit the move I’d been struggling with 2 times in a row so all happy J

Please welcome to the stage – Woody

I’ll be honest, I was sh***ing it.  The 3 acts on before me had all done really well and no one had made a mistake.  I on the other hand hadn’t done my act without mistakes J

Woody is my magic character,  this might sound arrogant but…I was born to perform magic, when I’m in character I feel like I’m one with the universe.  The rings were brought out and the opening move…BOOM! First time I hit it.  Was very happy.  Most the jokes went well and then came to the second danger bit.  The bit Shoot Ogawa, the legend of the rings got wrong 4 times.  First attempt I missed it.  The way I’ve set it up I can actually disguise that and make it out as if I’ve missed it on purpose the first 2 times.  Second attempt: I hit it! Pfew.  All happy. Continued with the ropes and some audience interaction and all went well.  Finished with a big applause

In the second half 2 new club members got up and both did really well.  I have to admit, I thought one of them was the favourite for the trophy, then the next act came on and did even better.  The general feeling in the room was, “I wouldn’t like to be a judge right now” as there really was very little between the top 5.  When this happens, small details like, who had the shiniest shoes comes into play.  I was happy I’d used clean ropes J.  My thinking was, that they had performed without any mistakes but although I’d made 3 minor mistakes I had more entertainment in my routines and a stronger performing character…plus unbeknown to the others…I’d been praying for the last 5 minutes.  So I also had God on my side.

The guy who I thought would win came 3rd so took a bit of the pressure off.

The Spanish guy’s name was announced next.  As he was my main competitor I was not more confident but by no means would I have been betting myself for the win.  Out came my name as first place.

I walked up and was tempted to hug the trophy but decided against it.  Walked off and gave the judges a big hug which looking back on it…probably wasn’t my best idea as people will no doubt think it was a fix and walking off someone said, why don’t you kiss them, so I saw a guy on the front row and decided to plant one on his cheek which got a big laugh.

Took the trophy home and went to my happy place – Facebook.  At the time of writing this my update got 89 likes – which I believe is a record for me.

However, this one is probably the most special.  I hadn’t prepared or performed very well at the last 2 contests and deep down I was wondering if I’d maybe lost something.  Also, the standard at the club has really improved and this year’s contest was the toughest by far.

Also I’m now only the second person to ever win the cup 4 times.  Not bad when you consider the clubs being going for 89 years.   The only other person who has done this was the guy to hand me the trophy, who’s not only a great magician he’s a friend of mine as well.  So that makes it all the more special.

Compering at the Bier Halle on Suchiehall street Glasgow